Ain’t nothing but bad news

I started this post over a month ago but have never been well enough to finish it before something else happens that I want to write about so I am continually playing catch up or editing the post. Rather than completely revamp this one I just want to get it out there and hopefully do a further post quite quickly this time.

It seems as if the holy grail that is remission is slipping beyond my reach unfortunately. I ended my last post, Baby steps to Day 100 on a bit of a cliff hanger as I was awaiting my bone marrow biopsy results. The results were that I had 5 to 10% abnormal plasma cells in my bone marrow. The doctor that gave me the results seemed to think this was good until I pointed out that it was the same result as before the transplant. He then described my disease as stable and said the transplant was probably working and it was early days and I was still on immune suppressant drugs blah blah blah.

I was very gloomy but slightly cheered by the light chain results which showed a reduction from 44 to 29 the second downward result. Not normal range which is up to 19 but not far away. At least that was some good news……until I got the next result a couple of weeks later which was they had shot up to 99 and then the next results two weeks later that they had increased again to 147.  It looks to me like my transplant has failed but my medical team are not using the R word yet.  The boss’s plan is to get me off the immunosuppressant drugs that I have been on before and since the transplant as soon as possible. I am just on cyclosporine now.

Immunosuppressants (anti-rejection drugs), are intended to suppress the function of the donor’s immune system for a long time after the transplant to help reduce graft versus host disease and the risk of graft rejection. I probably would have been tapering down earlier had I not had acute skin GVHD and been on steroids for 4 months. The hope is that as I gradually come off the immunosuppressants I will get some GVHD and also some graft versus disease effect. If that doesn’t work over the next two or three months and my light chains continue to rise quite then I will have to start chemotherapy treatment. Not even 6 months from my transplant and the possibility of being back on treatment looms.

Even though I no longer count the number of relapses any more as I’ve not actually been in remission for sometime now, this news comes with huge disappointment after all I have been through with the transplant and continue to go through.  I’ve not told many people about my latest light chain results as I can’t bear the weight of their disappointment resounding my own. I would like to be able to convey some good news but there seems to have been little of that since my last post especially in the last couple of months.

On a better note, prior to finding out my light chain results, I had enjoyable weekends away visiting friends in Otley and Nottingham and family in Whitley Bay. I felt I was getting stronger and whilst in Nottingham managed a longish walk in Lambley through fields of ripe golden wheat just ready for harvesting on a lovely sunny day with huge puffy cumulus clouds floating around the big blue sky. And the next day,  a gentle cycle ride around Attenborough Nature Reserve alongside the languid river Trent. The first time back in the saddle for quite some time, it has given me the confidence to want to do more. I was feeling good. Now I really need to hold on to that feeling. 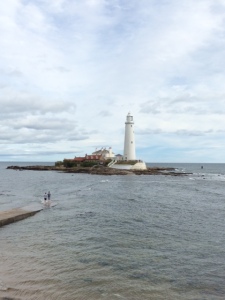 Then a week or so later I got sick and all those good feelings combined with the news of the rise in light chains set off my anxieties and fears. I started getting temperature spikes every evening and some sort of urinary tract problem which was immensely painful. I was given broad spectrum antibiotics and numerous tests were carried out but the actual type of infection or infections could not be identified which is quite common other than that I had adenovirus ( a common respiratory infection with cough and cold like symptoms but which can be life threatening in post allo patients) yet again. I was told to call the out of hours helpline if my temperature went to 38″ or above. I knew if it did I would end up having to go to A&E and so every evening became a tense game of waiting and watching. The recent loss of yet another friend with Myeloma to sudden pneumonia after his second stem cell transplant played on my mind as did the fact that the last time I had temperature spikes like this was after I relapsed the first time and myeloma was becoming active again. Fortunately I have not had the temperature spikes for the last few weeks and the urinary problem has gone.

I am so bored and tired of it all, there seems to be no end point in sight other than the most feared one. I’m bored of telling everyone my bad results, bored of having infections and being tired all the time and no doubt everyone is bored of hearing about it. People move on with their lives and their daily business  and I feel like I am stuck in a no man’s land with no way out.

When someone asks how are you, how I answer depends on who is asking, the doctors and transplant nurses want to know the gory details of my bodily functions, fine, they like detail and need to know, but when I say I am really tired or my legs ache all the time, they don’t have an answer.  When family and friends ask, I feel it sometimes crosses too many boundaries to go into detail and there are many responses I could give and sometimes I just don’t know how I am. I am told by my medical team that I am doing really well but it certainly doesn’t feel like that. I think my best and most honest answer at the moment is I’m surviving.

“Does anything in nature despair except man? An animal with a foot caught in a trap does not seem to despair. It is too busy trying to survive. It is all closed in, to a kind of still, intense waiting. Is this a key? Keep busy with survival. Imitate the trees. Learn to lose in order to recover, and remember that nothing stays the same for long, not even pain, psychic pain. Sit it out. Let it all pass. Let it go.”

― May Sarton, Journal of a Solitude

8 responses to “Ain’t nothing but bad news”