A further quick medical update as promised following on from my last post, The end of an era.  At an appointment on on 10 September that had been arranged with the lead transplant Consultant to talk about the possibility of a donor transplant after my auto transplant I was given the bad news that the percentage of abnormal plasma cells in the bone marrow was around 5 to 15 % and ideally it should be under 10% prior to transplant.  In consequence, much of that meeting was taken up with what to do about this.

The doctors were suggesting that rather than go ahead with the transplant on 17 September, I have one cycle of VDT Pace which is very heavy duty combination of 7 different drugs involving 4 days of a continuous cocktail of four different drugs given intravenously as an inpatient. The purpose of that would be to try and reduce my myeloma levels to be in the best possible position prior to transplant. I didn’t know much about it other than it was usually given to patients when all else had failed so it was a shock to me to be considered in this category.

I questioned whether this was really necessary as the one round of PAD I had just completed reduced my light chains to 49 from 100 so why not have another cycle of that but the consultants seemed to think that this regime should blast it, the equivalent to a Zombie cocktail in terms of strength.  I am partial to a cocktail or two but would probably never have one of these as it just contains too much alcohol!

Rather than questioning this further which would be my usual inclination I accepted it. I note this is more of a trend with me now, not that I have stopped keeping myself informed about Myeloma and treatments, just that I have given up thinking that there is a solution out there that is available to me and might be better.

For more detailed information about this treatment and the protocol, click on the this link, LNRCNDC001409_DTPACE1 . I didn’t have the T part (thalidomide) because I am intolerant to that so I had Revlimd instead. I also had Velcade added which technically makes it VDR Pace.

I started it on Thursday 18th September and I was allowed home the following Tuesday having tolerated the side effects fairly well apart from the main side effect of complete boredom whilst being attached to a drip! I think my facial expression says it all!

The rest of the treatment was oral Revlimid for 21 days and one further Velcade injection. I felt nausea, fatigue and had mucositis (a sore ulcerated mouth caused by the chemo). I can no longer remember the experience distinctly as so much has happened since then, save to say it was extremely grim.

A bone marrow biopsy was arranged for 23 October and I got permission from the Doctor to go away on a short trip to Europe, a week after the cycle ended subject to my blood test results being reasonably ok.  I decided on Menorca and had a lovely time. The only limitation being I couldn’t swim because of the PICC line in my arm but I was very happy and surprisingly active considering what I had been through being able to cycle along lovely country lanes and walk along some of the ancient Cami De Cavells.  I fell in love with Mr Boatsman, a rather handsome French Shepherd Dog belonging to my B&B host. Hard to believe my cycle had only finished the week before. This felt a world away and helped take my mind off what was coming next, my stem cell tranplant scheduled for 5th November. More on that in my next post. 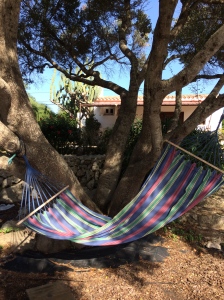 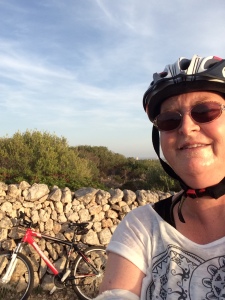 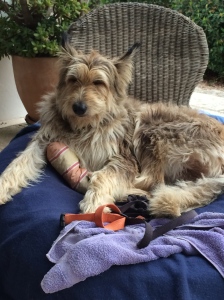 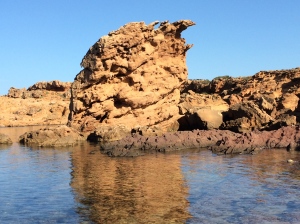 4 responses to “VDR Pace Chemotherapy – the Zombie of cocktails”