In the weeks before my diagnosis in December 2010, I noticed that my urine was foamy and frothy.  I found out that this is a sign of proteinuria. There was much worse to come.

Proteinuria (/proʊtiːˈnʊəriə/ or /proʊtiːˈnjʊəriə/; from protein and urine) means the presence of an excess of serum proteins in the urine. The excess protein in the urine often causes the urine to become foamy. Proteinuria may be a sign of renal (kidney) damage. Since serum proteins are readily reabsorbed from urine, the presence of excess protein indicates either an insufficiency of absorption or impaired filtration.

The nurse at my GP practice told me there was protein in my urine when she did the dipstick test. I didnt really know what that meant and didnt worry about it at the time. The dipstick test couldnt confirm what type of protein or how much.

It turned out for me to be not only a sign of renal damage but also of the presence of an abnormal protein known as Bence Jones protein, named after the scientist that discovered it.

A Bence Jones protein is a monoclonal globulin protein or immunoglobulin light chain found in the blood or urine, with a molecular weight of 22-24 kDa. Detection of Bence Jones protein may be suggestive of multiple myeloma or Waldenstrom’s macroglobulinemia.

The proteins are immunoglobulin light chains (paraproteins) and are produced by neoplastic plasma cells. They can be kappa (most of the time like me) or lambda. The light chains can be immunoglobulin fragments or single homogeneous immunoglobulins. They are found in urine due to the kidneys’ decreased filtration capabilities due to renal failure, sometimes induced by hypercalcemia from the calcium released as the bones are destroyed or from the light chains themselves.

When I was admitted to hospital with acute kidney failure,  I had to do all my urine in bed pans so that it could be tested over a 24 hour period, I wasnt told why at the time but now I know they were testing for Bence Jones protein which can only be determined by 24 hour collection.

Over the next couple of months as my kidney function returned to normal having been 10 to 15% of what it should have been at the time of admission and I started treatment for myeloma the frothy urine seemed to come and go. It wasnt every time like before.

My  haematology consultant didnt seem to think it was anything to worrry about but couldnt really provide me with an explanation of why this was happening so she referred me back to the renal unit. I should have had a follow up appointment with them anyhow after I was discharged from hospital. The first time I had an outpatient appointment in December 2011 typically I wasnt having any frothy urine and no protein was found but neither was any real explanation given to me by the young (aren’t they all!) junior doctor. I had a further appointment on 26 June when I saw a lovely more senior renal consultant who took the time to explain to me why I was getting intermittent frothy urine although again no objective evidence could be established.

I had intrinsic damage to the renal tubules caused by acute tubular necrosis (ATN), I dont remember what I was told at the time but “renal biopsy showed ATN and on re review a few casts” is on my discharge form. How this works in myeloma is that the tubules are increasingly damaged by the large protein load and large obstructing casts frequently form within the tubules. The combination of interstitial fibrosis and hyaline casts surrounded by epithelial cells or multinucleate giant cells constitutes myeloma kidney. 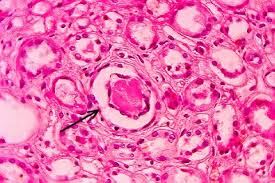 The myeloma casts are pale pink, pretty isnt it!

The tubules of the kidney can also be damaged simply due to  the toxic effects of these filtered proteins.

So with treatment of prednislone which is a steroid and intravenous fluids my kidney function recovered and then with my treatment for myeloma, the high level of free light chains started reducing and luckily I regained normal kidney function fairly quickly and importantly I have maintained it. I was probably hours away from needing dialysis when I was admitted and I know of people with myeloma in remission who still need dialysis due to the damage caused.

So it seems that as my kidney tubules are permanently damaged and I have a few casts, a bit like scar tissue I guess, which mean from time to time I will leak protein into my urine and as long as the myeloma is under control and the protein levels are not too high then it isnt a problem. Strangely enough I now rarely see it in my toilet at home but do in the ones at work.  It is one of the reasons why I still try and drink 3 litres of water  each day to keep flushing out my kidneys. I was told to drink this amount at the start of treatment to flush out toxins and there is differing views on whether I should still be doing this but at my last clinic appointment my consultant said I didnt have to as during remission I should try and live as normal a life as possible which shouldnt involve going to pee all the time! He suggested 2 litres of water would be fine and so now I am being a little more relaxed about it.

However seeing frothy urine is always a reminder of my condition and the fragility of my situation.

I am however hugely appreciative of just how normal my life is right now 11 months post transplant, apart from the frequent infections I have no aches and pains, no physical limitations, no fatigue (no more than anyone else that is!), just frothy urine and curly hair!